MMFF - Parade of the Best Filipino Films in Manila

What is the next big thing to expect when Christmas time comes?

The (MMFF) Metro Manila Film Festival that is!

In the spirit of the holiday seasons, every 25th of December, the much awaited Metro Manila Film Festival or MMFF is a treat for every Filipinos. This event happens specially because of the children after the traditional aginaldo (Christmas gift giving) has been given.

People especially kids during this time start planning what movie to watch. They try to see the different movie trailers and wait for the official announcement which movies will be included in the list of Pinoy movies this December. Theaters flood with movie goers after the tradition of gift-giving by "ninongs" and "ninangs". This is expected to happen in the afternoon when all the kids have already pooled their pamasko (cash gifts in the usual form)

The festival runs from Christmas Day until the first week of January of the new year. The festival focuses on only original Filipino films and no foreign films will be shown during the festival run. 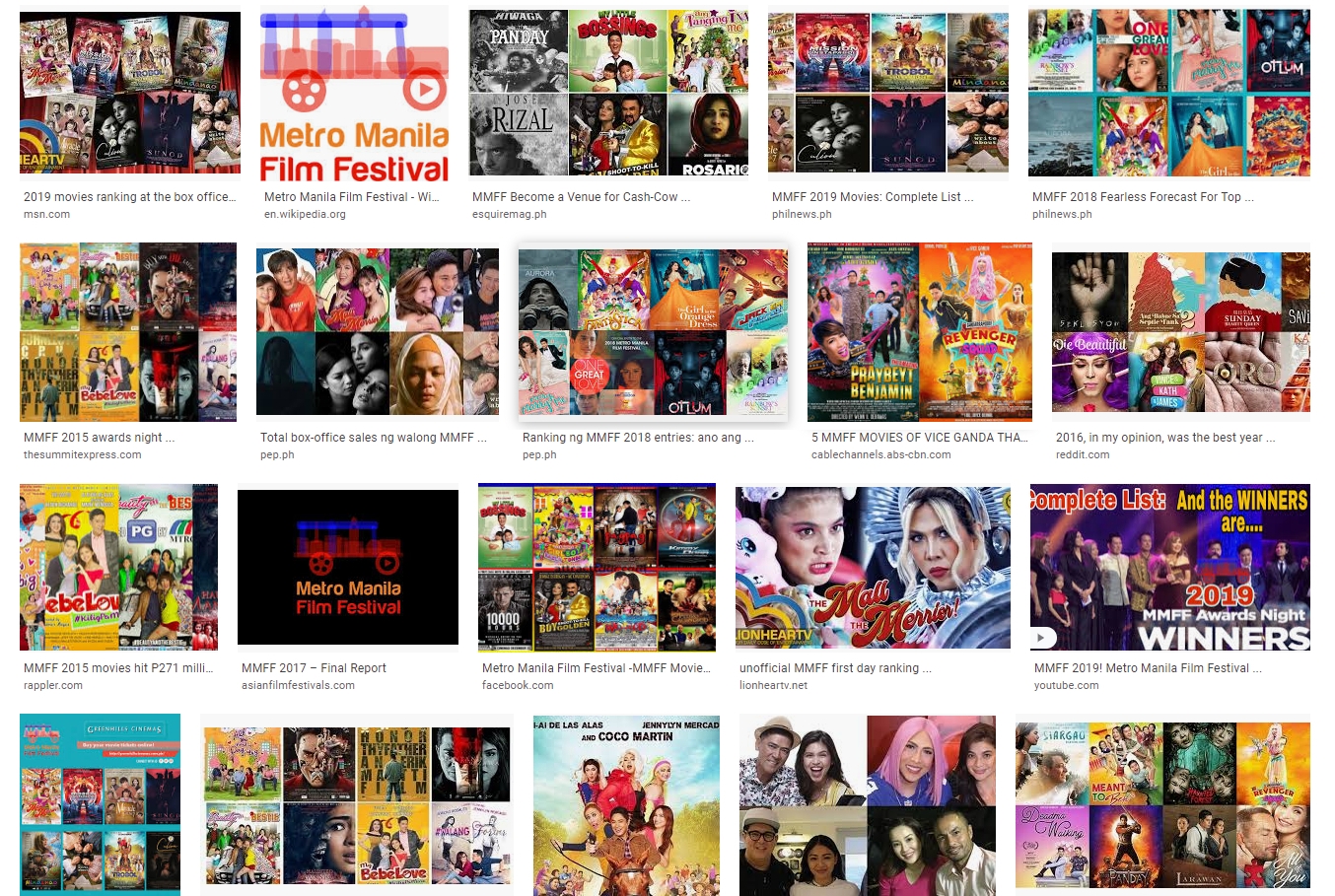 On the eve of the film festival, a grand parade of floats of the participating movies with the actors starring on each films is being held to start the festivities. Back then, the parade was held only along Roxas Boulevard but because of the growing spectators and fans of movie stars, the organizers sometimes plan a longer route for the fans entertainment. The participating films was approved by the board of jurors of MMFF.

After the grand parade of floats of the stars, a small program is always being held for the fans to interact with their favorites and a formal invitation to watch each of the movie entries on Christmas Day. The MMFF awards night is usually held on the 27th of December.

History of the MMFF

Manila mayor Antonio Villegas spearheaded the first MMFF in 1966 which was then named Manila Tagalog Film Festival to commemorate the Araw ng Maynila.  It was a 2-week run of only local movies to be shown in every theaters. Mayor Villegas also wanted to help and promote Philippine movies not only locally but internationally. The parade of stars was held in Downtown Manila which is now the Rizal Avenue or Avenida.

‘Daigdig ng mga Api’ was the first Best Picture of the 1966 Manila Film Festival.  It starred the Audrey Hepburn of the Philippines, Barabara Perez and her husband Robert Arevalo. The movie showed the story of millions of Filipinos living and surviving poverty.

‘Dahil sa Isang Bulaklak’ won the best picture in 1967 and it was the first Filipino film shown in color. The late great Filipino actress Charito Solis starred in this film. It was also selected as the Philippine entry at the 40th Academy Awards for Best Foreign Language Film.

The Manila Film Festival was put on hold in 1973 when Martial Law was declared by then ousted Philippine dictator Ferdinand Marcos. It was only revived in September 21, 1975 renaming it Metropolitan Film Festival which was eventually re-named to its present name Metro Manila Film Festival in 1977. ‘Diligin Mo ng Hamog ang Uhaw na Lupa’ was announced as the best picture in 1975 and the present Manila mayor Joseph Estrada was the first recipient of the Best Actor award for the same movie and Charito Solis as Best Actress for the movie ‘Araw-Araw, Gabi-Gabi’.

In 1984, the festival created a special award honoring the man who started this tradition, the Gatpuno Antonio J. Villegas Cultural Award for the films that best describe Philippine culture and tradition.  The first movie to receive this prestigious award was ‘Andrea, Paano Ba ang Maging Isang Ina?’ starring Nora Aunor portraying the role of a woman activist who left his baby to look for her lost her husband and found out that he was killed by the military, a familiar and real life situation that was happening then and now in the Philippines. When it was her time to go back to her child who was now a grown up man, a fight for his custody and her way to win back her son’s affection

The MMFF Today as Modernized thru Time

Metro Manila Film Festival now recognizes the independent or indie films just like the Sundance Film Festival held annually in Utah which honors American and international independent filmmakers. MMFF jurors are now not only movie critics but students, teachers and ordinary people are now included in the panel for a more diverse and unbiased choice of winners.

The MMFF is a prestigious event but is not excuse with controversies specially with the modern MMFF. Most notable of these controversies was during the 20th MMFF awards night in 1994.

The awards for Best Picture, the Gatpuno Antonio J. Villegas Cultural Awards, Best Director and Best Screenplay were not given for the reason that there was no entry deserving of these awards.

Then the most famous controversial line ‘Take it take it’ happened when the awards for the Best Actor and Best Actress was announced.  To the dismay of the then Manila mayor Alfredo Lim, he threatened the presenters actress Ruffa Gutierrez, her brother Rocky Gutierrez, Miss Universe 1993 contestant Miss Mauritius Viveka Babajee and talent manager Lolita Solis criminal charges for fraud in announcing the true winners of the two awards.

Actress Gutierrez and actor Gabby Concepcion were announced as the best actress and actor respectively when it the true winners of the said categories were Aiko Melendez and Edu Manzano.  Talent manager Solis owned masterminding the cheating asking the public specially Mayor Lim to forgive what she has done.

In 2016, the 42nd MMFF awarded the Fernando Poe Jr. Memorial Award for Excellence (named the category in honor of the King of Philippine Movies Fernando Poe Jr in 2012) to the film ‘Oro’ directed by Alvin Yapan based on the 2014 murder of four miners in Camarines Sur. And many movie critic, writers and moviegoers were uproar by the choice of the movie which depicts animal cruelty wherein a dog was beaten to death, disemboweled, cooked and eaten by the actors.  Animal welfare group Philippine Animal Welfare Society (PAWS) filed a case against director Yapan and the producers of the movie for violating animal rights

For the 43rd Metro Manila Film Festival, the traditional Parade of floats was not held in Manila but in the city of Muntinlupa to commemorate the centennial founding of city as a municipality.

New rules and regulations were established choosing the entries that will make up the 8 film to participate in the festival.  The submission of scripts were reintroduced and the committee will select four scripts and four finished films.  With this system, lesser main stream films that prioritizes the box-office result and more worthwhile films can be exhibited during this two week long festivities.

Below are the following winners of MMFF 2017 event.