A neighbor of the Philippines, The Republic of the Union of Myanmar, formerly known as Burma is a small South East Asian country. It only has a total population of 51,419,420 back in 2014 as reflected in the provisional result of the Myanmar Census. The most densely populated among its cities is Yangon with 5,211,431 while Magway is the least with only 289,247 according to statistics based from Wikipedia. Primary religion of the Burmese people is Theravada Buddhism covers roughly about 48 million from out of the 50M population. Unlike the Philippines, Catholicism and Baptism combined is only its 3rd preferred for the people next to Islam which had 4% of the total alone. 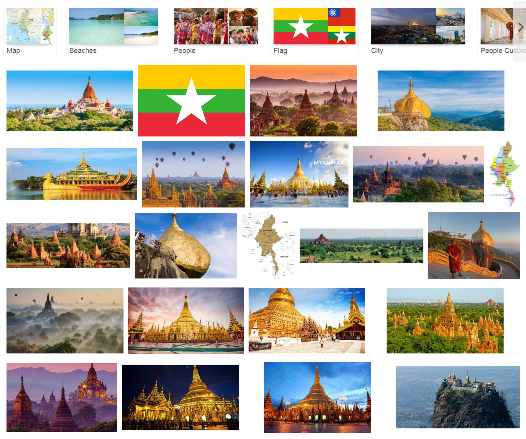 The name of the current president is Htin Kyaw while the official language of the people is Burmese with numerous diverse local languages by ethnicity consisting of 100 or more. The capital city is Naypyidaw. Currency or money being used in the market and all sorts of business and monetary transactions is the Burmese Kyat.

For those tourists and foreigners who want to visit this beautiful country, just be sure you have enough of their local money currency for convenience. Otherwise, many establishments allow major visa credit cards.

Bamar people is the dominant ethnic group in Burma characterized by monks who usually live in temples and mountain mosques. they live primarily near the Irrawaddy River basin. They speak Burmese language. Bamar culture is largely influenced by its surrounding countries like India, Thailand, Laos and China which can be seen in their language, cuisine, music, language, theater arts and dance.

Literature is know to have been greatly influenced by Indian religion which is the Theravada Buddhism. The Pagoda Festival is one of its most important celebration. The Bamar traditional dress is called Sarong. Women wore Htamain while men have their Longyi.

All government public services are itemized from the official website of the president which you can find here. One of the most important local agency for this country, just like in the Philippines' SSS (Social Security System) is the SSB or (Social Security Board). This agency provides programs for public employees, including members of the civil service, state corporations, municipal authorities, state boards and military personnel, as well as employees in limited private sector industries, including commerce, railways, ports, mines and oilfields.

Just like any other member of the ASEAN, Burma is also a stronghold of tourism in the South East Asia. A blog review reveals the top 10 tourist spots in the country which you can read here. In the meantime, you can watch a great video presentation of the country from YouTube below for a background on what to expect when you visit Myanmar.

Located in Bago, this is the tallest pagoda in the country, this religious figure is 15 meters higher than Shwedagon and is covered in gold with diamond-studded top. It also contains several relics belonging to Buddha.

Sail along the historical longest river of Ayeyarwady thru the luxury Strand Cruise Ship or cheap cruise lines available for the Ayeyarwady River Cruise. This cruise takes you to an overview of several temples and pagodas and local river villages.

Found in the city of Mandalay, this is a historic Buddha temple.

Lined up with luxury hotels, this is a first class resort area with beaches that span up with the blue sea waters of Myanmar. Ideal visit by tourists is from November to March.

An archaeological town, originally thought to be a fortress because of the thick walls. Numerous stone temples of different shapes and sizes can be found inside the town area. Can only be reached thru a 47 hour boat ride.

Home to both marine life and fisherman traders, this is a place for transporting goods of the local villages beside the lake.

A monastery build in the very crater of an inactive volcano, it is a breath-taking sight for tourists. In order to reach atop, visitors must climb thru a 777 stairs to the summit. Once in the monastery, one can enjoy the panoramic view of a whole vast area of surrounding land.

Covered in diamonds and shining gold, this is considered as the most sacred sight of Buddhism in Yangon, Myanmar, this pagoda nurses a strand of Buddha's hair together with other precious religious relics.

Located 3600 feet above sea level, this religious icon is sitting in a cliff-like boulder and is a 5 hour drive from the city of Yangon with very long walk leading to the stairs to the temple. It is also believe to contain a strand of hair of Buddha.

The capital of the first Burmese Empire, Bagan is one of kind in the world with respect to Buddhist temples. This city nurses more than 13 thousand Buddhist temples, there is no place on earth that is home to more than this number today.

Curently, 8 countries are not required a visa copy to be able to visit Myanmar. These 8 countries include, Philippines, Thailand, Laos, Indonesia, Brunei, Cambodia, Singapore and Vietnam. There are 3 major airports namely, Naypyidaw, Mandalay and Yangon International Airport.

Below is a complete list of the different Myanmar Embassies abroad. Hover and click on a link below to visit and see contact details, location, hotline numbers and respective ambassadors or head of missions.